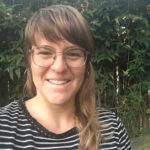 (they/them/elle) As a San Francisco native, Molly is humbled to serve their community as the San Francisco Campaign Organizer. Their passion for organizing in San Francisco comes out of a love for their home and grief for all that has been lost there. Domestic workers were a consistent part of Molly‘s childhood; Molly‘s family and many others in the SF private school system hired nannies and house cleaners. Molly feels a responsibility to honor these workers’ care and labor by advocating for domestic workers in this role. They originally encountered Hand in Hand when they attended a “History of the Domestic Worker Movement” workshop in 2019. Molly first got involved in organizing in college, where they supported a campaign to fight the eviction of a mobile home park in Palo Alto. Since then, their justice work has included rising up as a part of the New Orleans Hospitality Workers’ Alliance while working as a server, supporting political education trainings through POOR Magazine, and grassroots fundraising through Resource Generation. Molly also loves dancing, swimming in the Pacific all year round, and the enneagram.