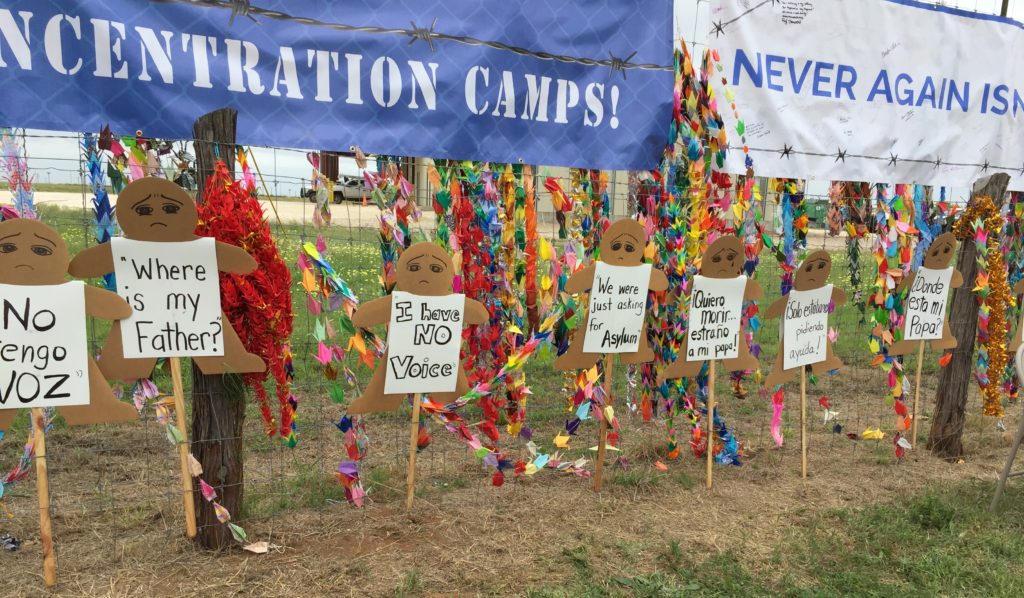 In Japanese tradition, an offering of 1,000 origami paper cranes is a wish for hope and healing. Our goal was to have 10,000.

Over the past year, I’ve been a part of Hand in Hand’s Playdate Protests against the family separations and inhumane detentions of immigrants at the US-Mexico border. Playdate protests were colorful, fun, loud, and defiant family gatherings at local Immigration and Customs Enforcement offices, congressional offices, and then at Wells Fargo and JP Morgan Chase for their investment in private detention corporations (winning commitments from both banks to withdraw their funding).

Though the protests have brought some progress, there are still children and mothers, and children who have been separated from their mothers, locked inside detention centers.

Then a friend from these protests, Shoshana Arai, invited me to join a Japanese American Pilgrimage to Texas. It would have two stops: First, the site of a former World War II Immigration and Naturalization Services (INS) camp in Crystal City, Texas and then, the Dilley Family Detention Center, where immigrants were still being held.

We put out a call for 10,000 paper cranes, and people from all over the country – at elementary schools, churches, community organizations, San Quentin Prison – began folding cranes and mailing them to us.

In March, we headed for Texas. We were joined on our trip by people who as kids had lived in the Crystal City camp, their family members, and other descendants of WWII-interned Japanese Americans. Th

My parents’ families were incarcerated at Tule Lake, a camp located at the California-Oregon border, and I have found that witnessing the stories of former incarcerees to be a profoundly healing and motivating experience for myself and for the community.

At the Crystal City Pilgrimage, we talked about how the thousands of people of Japanese descent held in Crystal City in the 1940s had been deported from Latin American countries. The US government intended to use them to engage in prisoner exchange with US prisoners of war held abroad. Even though Japanese Latin Americans were forcibly removed from their countries and brought to the U.S., they were considered undocumented. (Source.)

Even though the survivors we met were children in the camps, and even though their parents often tried to shield them from the harshest aspects of incarceration, most of them shared with us how deeply the experience hurt their families. Fathers were separated from their families, and people died from lack of health care. They rightly feared for their survival.

The incarceration experience of Japanese Americans and Japanese Latin Americans during WWII raises questions today about how immigrants, particularly people of color, are criminalized as a group. It exposes long-term harm that is caused by these policies of racism and xenophobia.

But my visit to these places was also a hopeful one. 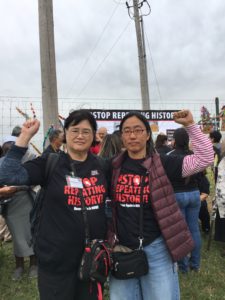 Just as with Hand in Hand’s Sanctuary Homes campaign and Playdate Protests, we brought diverse, multigenerational communities together to call for an end to inhumane treatment of immigrant communities, and connecting our personal stories and histories to take action.

When we arrived at the Dilley Family Detention Center with, we had with us not ten thousand but twenty-five thousand paper cranes, which we hung on its barbed wire fence. The cranes were symbols of hope and healing as well as a pledge of solidarity to the mothers and children detained inside.

When my parents’ families were incarcerated just because of their ethnicity, there were Americans of all colors and backgrounds who objected. And on this occasion I was here to do the same. There were scarlet bunches of cranes hanging like vivid sprays of flowers, and there were rainbow-colored garlands strung like bunting. So many colors, from so many different places. In our national conversations about immigration, there’s often a theme of scarcity: not enough jobs, not enough safety, not enough money to let immigrants into our schools or hospitals. But look: There was more than we even dreamt to ask for.