Sage Jobsis, a steering committee member, shared her personal experience of becoming involved with Hand in Hand, and what membership means to her. 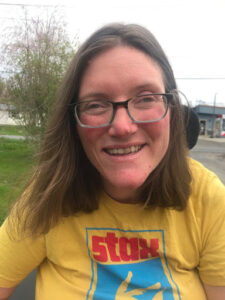 How did you get involved with Disability Justice?

Prior to being diagnosed with MS I had always been able-bodied, and I had sort of assumed that disability justice was happening, and I didn’t really need to pay attention to it. But once I became sick and began using a wheelchair, I realized how many barriers there were to getting access to spaces I had been in previously. I realized just how unsafe the safety net is for people with disabilities.

So I decided, if not me who? I’ll go talk to people about accessibility, because I am outgoing, and talking is one of the things that I’m best at! That’s kind of how I started, and as I met more people who were engaged in this work, or interested in talking to me about accessibility my network grew.

Where are some of the places you started talking to people about Disability Justice?

It started literally next door to my house because I live next door to a restaurant/bar.  I was friends with the bartender, and there was a little barrier to get in the entryway, it wasn’t big, it was maybe 2 inches, but I couldn’t get in and so I talked to her about it. She talked to one of the managers, and I showed them what it was that needed to happen, and they fixed that. I was like “wow” that’s all it took!

How did you become involved with Hand in Hand?

I joined Hand in Hand three years ago when I met Julia Solow.  It was wonderful because one of the things that I felt since becoming disabled was isolation. It felt so good to be engaging with a group of people who are also in the same struggle. We’re all kind of moving in the same direction. and that felt so good just to be among peers instead of dragging people with me in order to get a step fixed. It just felt so good that it was assumed that this is who we are, and this is what we’re doing, and that sense of community is what led me to want to become more and more involved.

How does New York’s worst in the nation home care shortage impact you and your community?

Recently he started a new job and we’re going to have to hire someone through private pay— there are no home health aides that will accept the state payment because the pay is so low. So we have to try to find people we know and offer them more money.

I know that my needs are putting people I love in situations that are not what they want. They’re willing to do it because they love me, but it’s not right that Mark has to make a choice between taking a job and deducting a large portion of his earnings to cover my care.

How is Hand in Hand and NYCM addressing the home care crisis in NYS through Fair Pay for Home Care?

In New York State we just had a big fight about the New York State budget. We were trying to get the Governor to fully fund the raising of the wages of home health care workers to 150% of the minimum wage. Which we did not get, but we staged some political actions and made ourselves very known.  We also got ourselves in the New York State budget, a raise of $3 per hour for home healthcare workers–  but it’s not enough to address the crisis. We really tried our damndest to do it, but it was an important stepping stone, and we’re continuing to keep up the fight.

Can you share a special moment from the Fair Pay for Home Care campaign?

Yes! For the campaign, my partner Mark made a huge 70 ft scroll that we used to write down the names of people who are on waitlists to receive home care across the state. We were filling out the names in the state capital and the list kept growing. We did a sit-in and state legislators came up to us and added their names and the names of some of their constituents onto the list.

In our actions, we would read the names on the list. We started chanting “say her name” and then we would read one name, it went on for so long.

It felt so good to hear the names chanted– these are people who really need home care! When you are at home, you feel so alone in your struggle for care. It felt good to shout these names and have these names echo, to make it a collective issue. Even though the bodies of those people weren’t there, we made them present. It was so powerful to see and hear. 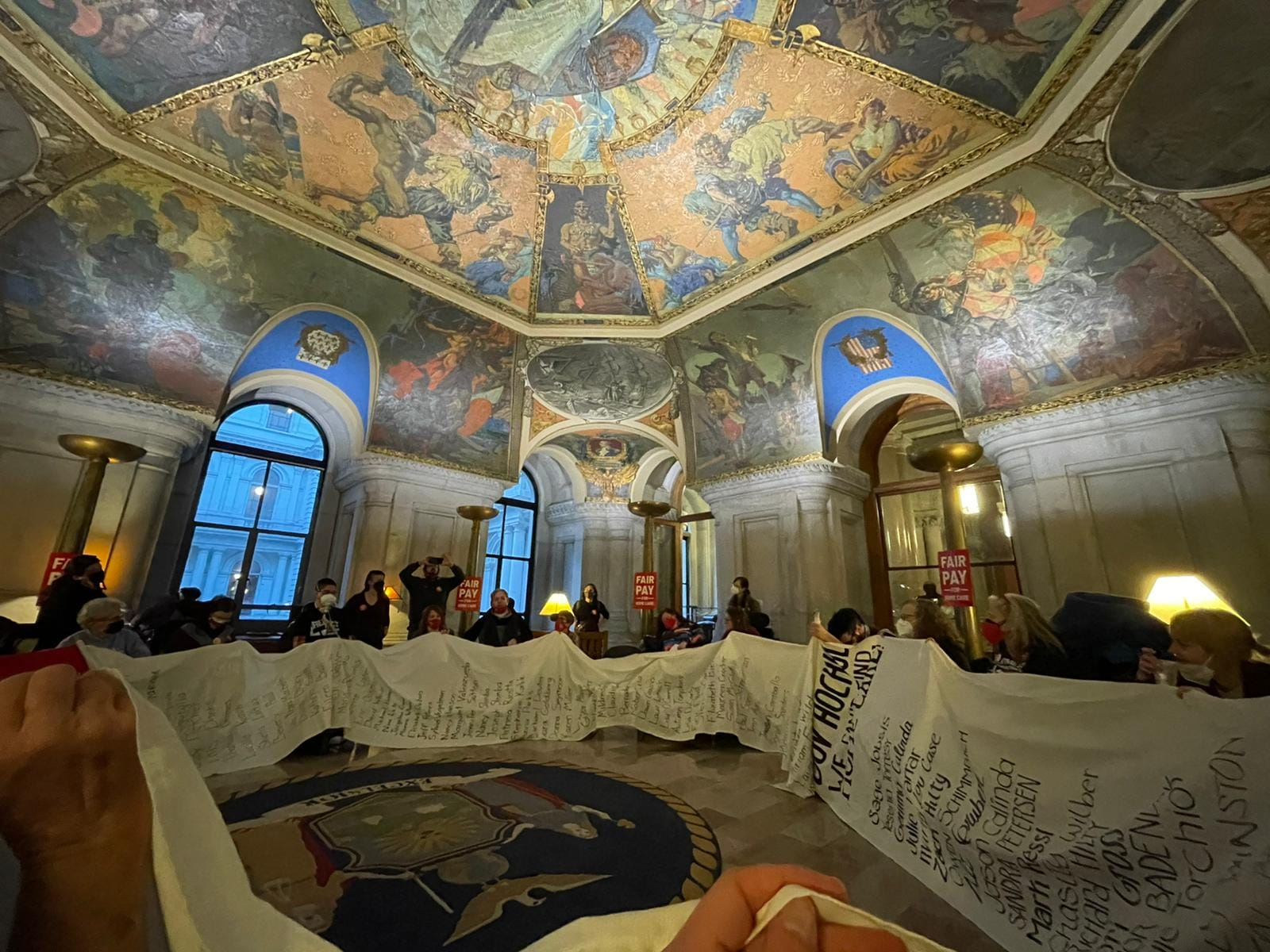 Why do you think others should join Hand in Hand?

We all feel alone with our struggles, like I’m having a hard time getting my shower to work or making sure that my mom is cared for. It’s very easy to turn that into a solitary thing. It is so much easier to deal with those things if you know that there are others who share your struggles and understand what you’re going through. It’s empowering to know that there are others on the same page as you and that you’re not just doing this alone.

Hand in Hand is a place to find community and to make tangible wins that impact people’s lives. 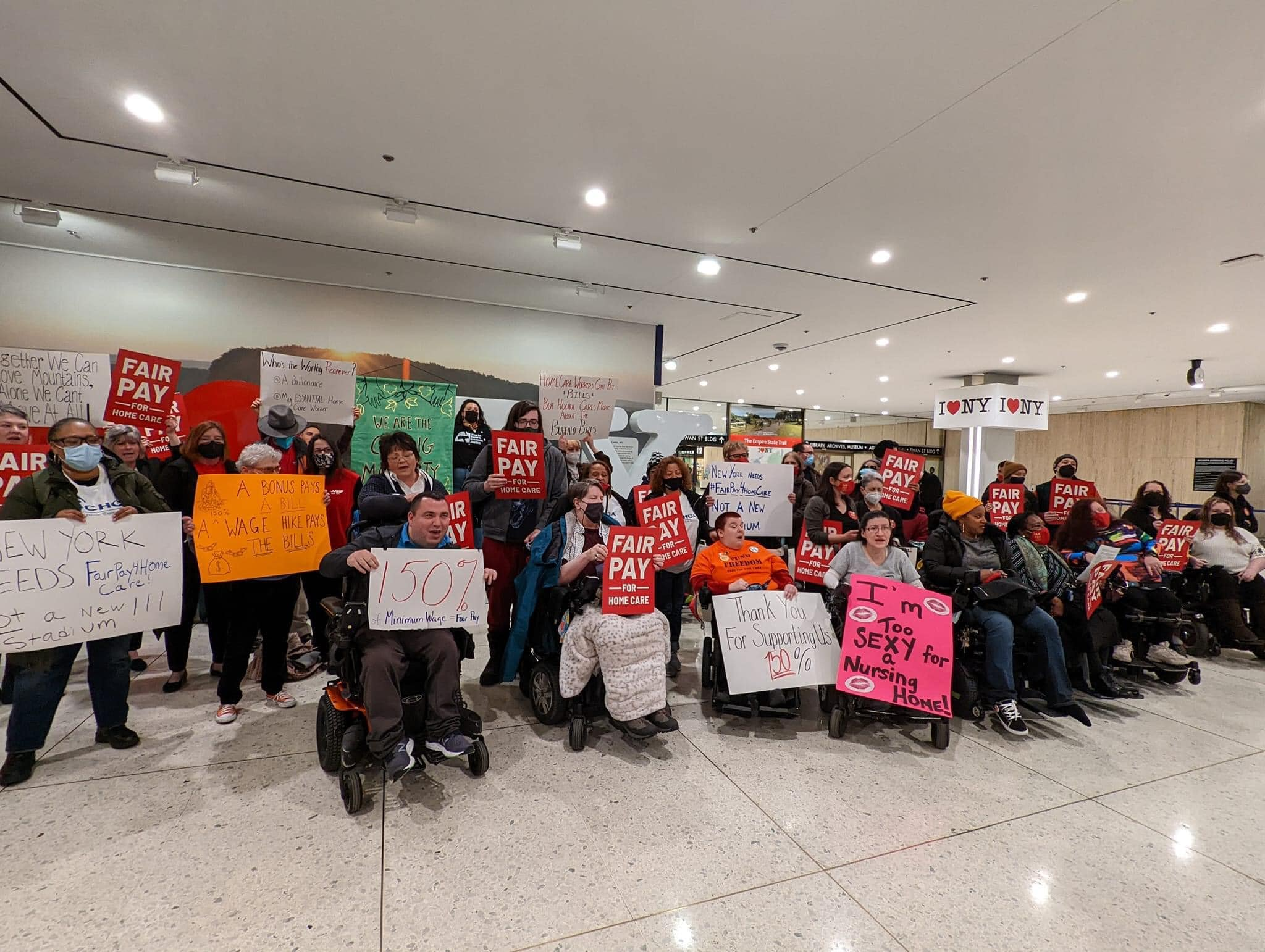