This month, as we celebrate the Americans with Disabilities Act (ADA), which turns 32 this year, we ask that you take a moment to support our commitment to ensuring that air travel is safe and accessible for people with disabilities by urging Congress to pass the Air Carrier Access Amendments Act, H.R. 1696/S. 642.

As leaders in organizations that represent people with disabilities, we have seen firsthand how dangerous airline travel can be for wheelchair users. We are still reeling from the needless death last year of Engracia Figueroa, a beloved member of Hand in Hand, who passed away due to injuries she sustained when United Airlines broke her custom wheelchair. For the disability community, her story was far too familiar.

Charles Brown, Paralyzed Veterans of America National President, also sustained critical injuries when airline personnel who were inadequately trained, dropped him onto a jet bridge fracturing his tailbone, and causing a serious infection. While he thankfully survived, he spent months in the hospital fighting for his life.

Airline travel is covered under the Air Carrier Access Act (ACAA), a law that needs to be amended to better protect wheelchair users while flying. In 2021, an average of 20 wheelchairs per day were lost, delayed, destroyed, or damaged per day by airlines, and there is inadequate training for airline staff, because the law does not hold the industry accountable. 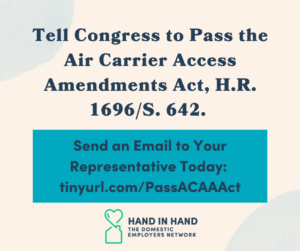 This is why Hand in Hand and Paralyzed Veterans of America are joining forces to urge Congress to pass the Air Carrier Access Amendments Act, H.R. 1696/S. 642.

Together we can ensure that airline travel is safe and accessible for all.