The Domestic Worker Industry is Inextricably Linked with Anti-Black Racism

To fully understand the connection between police violence and killings of Black people to domestic workers rights, we have to connect the legacy of slavery and anti-Black racism to the criminalization of domestic workers, the passage of labor policy that developed using this racist lens, and the ongoing racism faced by domestic workers in the United States, in many of the homes where they work and beyond. 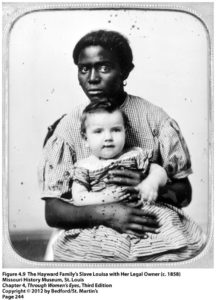 The historic roots of anti-blackness and white supremacy began with the rise of chattel slavery and colonization of the Americas. While the majority of enslaved Africans worked in the fields, an estimated 15% worked as domestic servants on plantations in the South.

Even though the 13th Amendment abolished slavery in 1789, Black people were regularly enslaved as criminal punishment. After the abolition of slavery, many Black women worked as domestic workers, but were still criminalized within the work. In 1872, Emma Jones was sentenced to 2 years in state convict camps for not returning clothes to her employer. In 1892, Susan Conyers, a cook for a white family, was arrested for arguing with her employer.

From 1908 through the 1930s, several states forced Black women prisoners to serve as domestic workers for white households as a part of their sentence. Workers were not paid and were forced to work with the threat of re-incarceration.

As a concession to racist southern lawmakers, the Federal Labor Standards Act, passed in the 1930s, continued to perpetuate anti-Black racism by failing to include domestic workers and agricultural workers, most of whom were Black. The FLSA promised workers forty hour work weeks, minimum wage, and the ability to unionize. Legislators in the South shared their racist views publicly in their demands that agricultural workers and domestic workers be excluded from the law. In fact, South Carolina Senator “Cotton” Ed Smith said on the Senate Floor, “Any man on this floor who has sense enough to read the English language knows that the main object of this bill is, by human legislation, to overcome the splendid gifts of God to the South.” Those splendid gifts being, apparently, the long-exploited labor of Black people.

Today, Black women in the United States experience poverty at a higher rate than all others except for Native women. According to a report by NDWA and the Institute for Women’s Policy Research, more than 75% of Black women are the sole earners in their households.

Alicia Garza, NDWA’s Special Projects Director, simply explains anti-Black racism: “The closer you are to Blackness, the worse off you are. The closer to white, the better off you are.” The impacts of anti-Blackness are reflected in the disproportionate numbers of Black people killed by the police, the disproportionate number of Black people dying from COVID-19 due to the lack of access to healthcare and protections, the unequal access to housing, education, employment, and so much more. Anti-blackness is pervasive in the United States.

In a survey conducted in Atlanta in 2018 by We Dream in Black, a project of NDWA, 94% of domestic worker respondents reported workplace concerns ranging from low wages (65%), being asked to do work different from the original hired job (39%), to being asked to work more than the scheduled hours (37%). Sixty-seven percent of respondents did not have work contracts or make enough money to cover living expenses. A similar survey conducted in Durham, North Carolina found that 95% of respondents reported workplace concerns with 85% reporting low wages.

Since 2010, policy wins have helped begin to correct the structural racism that established labor law and secure rights for domestic workers. While these wins have given thousands of domestic workers new rights, only nine states and two cities have these policies on the books. It is not enough. We need nationwide legislation, enforcement mechanisms, and a massive employer education program to create sweeping change. We also need to raise standards beyond woefully inadequate minimum wage laws, and we need all employers to work in deep solidarity with the domestic worker movement.

Divesting from Violence, Investing in Care

Today, as we join the historic uprising against police violence, we also envision a future where instead of funding bloated police budgets, we fund long-term supports and services, so that people can stay in their homes and pay dignified wages to their home care attendants. Where instead of purchasing weapons of war to be used on our cities civilians, we invested in universal childcare for working parents. And where instead of funding police escalation and violence against protesters, we create job training programs and affordable housing.

What Can You Do Now?