Special guests at the Oscars: Domestic workers from NDWA & beyond dressed for the red carpet.

Victory! JP Morgan Chase decided to stop financing private prisons that keep immigrant families separated. Congratulations to everyone who joined us in this fight for over the past year. All your efforts mattered, from petitions to playdate protests! The fight isn’t over, so if you haven’t yet joined, sign our Sanctuary Homes Rapid Response pledge.

Become a better boss at home

Join our webinar My Home Is Someone’s Workplace on March 13 at 12:30 pm Pacific / 3:30 Eastern, to learn the best practices of building positive, mutually respectful employment relationships in the home. We cover everything from pay to contracts to paid time off through a new online platform called Alia.

Add your name to the national Domestic Workers Bill of Rights

Sponsored by Senator Kamala Harris and Representative Pramila Jayapal, the National Bill will extend protections like minimum wage, anti-discrimination, and the right to organize to the domestic workers serving millions of seniors, people with disabilities, children, and our homes. Sign Hand in Hand’s petition to join this important campaign.

Join us at upcoming budget hearings on March 19th and 28th to advocate for $5 million to expand education to both domestic workers and employers on their rights and responsibilities.

Join us at budget hearings on March 14th and 20th to request funding for a study that will help us create a social insurance program to support middle-class seniors and people with disabilities, who don’t qualify for other programs but can’t afford the services they need.

Can you come? Can you speak at a hearing? Please email lindsay@domesticemployers.org.

Have a homecare story?

Do you struggle to afford homecare for yourself or a loved-one? Or are you trying to provide support to a relative with no help? An estimated 43 million Americans are providing support for an aging relative or a relative with disabilities, without any compensation. We are trying to tackle this challenge along with senior and disability groups and homecare workers. Stories are a powerful tool for change, so please share your story with us! Email lindsay@domesticemployers.org.

We’re reaching out to Seattle employers to provide information about what the new Seattle Domestic Workers Ordinance law means when it goes into effect this July. Educational events will be scheduled this spring, and we need your support: sign up here and share with your Seattle friends! You can email us at seattle@domesticemployers.org.

We’re on the move: The Pennsylvania Domestic Workers Alliance is leading a campaign for a Philadelphia Domestic Worker Bill of Rights.  There will be critical meetings and actions coming up in March! We’re also working hard to spread the word about Alia and recruit employers of house cleaners to sign up and bring other employers on board. There are March information sessions coming up in West Philly, Graduate Hospital, Merion Station and more. Contact amy@domesticemployers.org for more info on Alia and how you can support the Philadelphia Domestic Worker Bill of Rights!

Caring Majority campaign: Weekly calls every Wednesday from 5 – 5:30 pm for updates on the NY Health Act and campaign actions.

We are excited to launch new partnerships in the Upper West Side with the Jewish Community Center and the Collegiate Church where we will have ongoing workshops and political actions bringing together family caregivers, domestic employers, and allies.

April will be our next NYC Chapter meeting!

Email tatiana@domesticemployers.org for details on any of the above events.

Valentine’s Day weekend, we showed up at fifty Wells Fargo and Chase bank branches and headquarters to demand the banks divest from private prison corporations that are detaining and separating immigrant families.

In response to our actions, Wells Fargo tweeted that they were backing off of the private prison sector. And just this week, JP Morgan Chase announced they would no longer finance the sector at all. NYC leader Emma Katz broke up with her bank JPMorgan Chase and tore her card up!

Our Steering Committee member Nikki Brown Booker spoke at the press conference for SB 512, which would create a commission to develop and manage a Long-term Care/Long-term Supports and Services social insurance program to help address the high cost of homecare for California seniors and people with disabilities.

Convening workers and staff of nearly 50 groups from across CA, the CA Domestic Worker Coalition held a day-long summit to prepare for the upcoming budget campaign to win funding in the state budget for a domestic worker rights education program and to build the organizing and campaign skills of participants. We presented about Hand in Hand’s work to educate domestic employers. You can see our presentation here.

Hand in Hand and all of our partners in NY Caring Majority celebrated the introduction of the New York State Health Act at a press conference in Albany. This piece of legislation would be the first single payer bill in the country to include Long-Term Care as part of a comprehensive universal health care program. Hand in Hand members also met with legislators in Albany to protest against proposed cuts to the Consumer Directed Personal Assistance Program in the Governor’s budget, and for increased investment in the home care workforce.

Check out these timely stories

After Roma—a film starring a domestic worker— took home 3 Oscars at the Academy Awards, we got the inside scoop from our colleagues who were on the red carpet that night. Watch a replay of our conversation. 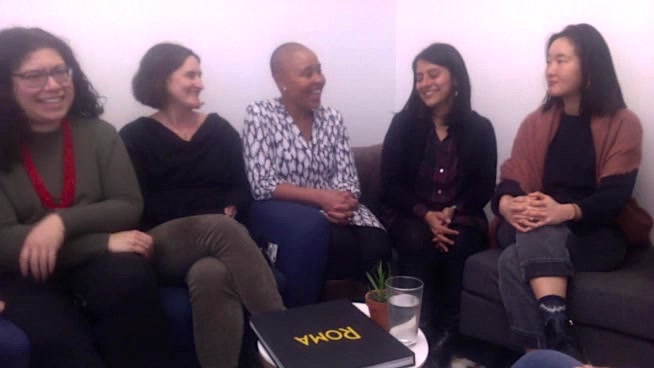