Hand in Hand, as part of the New York Caring Majority (NYCM) coalition fought tirelessly this budget season to pass The Fair Pay for Home Care Act, legislation that would have raised home care wages in the state by 150%, and ended the worst-in the nation workforce shortages. While wages increases of $3/hr over the next 2 year were included it in the final budget, they are nowhere near enough to solve the problem. Below is a release that NYCM released shortly after Governor Hochul’s budget was announced. 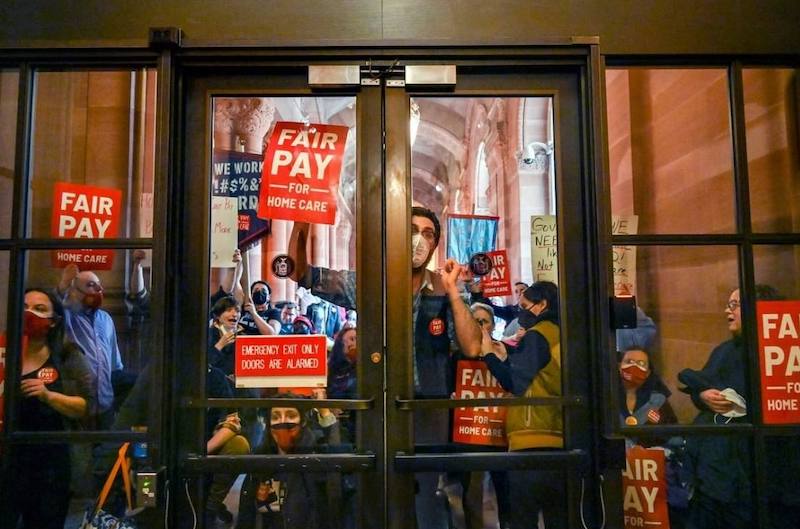 “The budget makes clear that Governor Hochul and the legislature know New York faces a dangerous home care shortage — yet their investment falls far short of ending this crisis. Older adults, disabled people and home care workers across the state forced New York’s worst in the nation home care workforce crisis into the spotlight. Thanks to thousands of home care organizers and advocates, the budget includes raises for home care workers; however, this increase comes nowhere close to what has been clearly demonstrated need – a need both houses of the Legislature had initially recognized in their one house proposals. Disabled people will be forced to sleep in their wheelchairs, older adults will go without meals, too many people will be forced into nursing homes and essential homecare workers will struggle to pay their bills because Governor Hochul has chosen to squander the state’s multi-billion dollar surplus.

“As New York’s population ages and home care workers continue to flee the sector, we are clear that a significant pay increase – 150% of minimum wage –  is the only solution to stem the home care shortage. The economic benefits of such an increase were demonstrated repeatedly. Instead of following a path that would have created a two to one return on investment while lifting a workforce made up primarily of women and people of color out of poverty, Governor Hochul and Legislative leaders kept this workforce at the bottom of the economic ladder.

“Although we are upset by the outcome, we are incredibly proud of the coalition that we built to force the state to take action. We are also grateful to our tenacious bill sponsors, Assemblyman Dick Gottfried and State Senator Rachel May, and our dozens of champions in both houses of the legislature. Together, we changed the way that home care is discussed in New York, and together we will keep fighting for a New York in which care workers are valued and all our families can receive the care we need to live and age in our homes and communities.”