You don’t have to be a scientist to know that smoke kills. In response to the intensifying California wildfires that each year break records in numbers of acres burned, homes destroyed, and people killed, State Senator Maria Elena Durazo (Democrat, Los Angeles) introduced the Health and Safety for All Workers Act, SB 1257, in late February 2020.

A long-time labor and immigrant rights leader, Durazo was responding to the stories that house cleaners and other domestic workers recounted about pounding headaches, burning eyes, and shortness of breath that followed working in perilous conditions without personal protective equipment. As Socorro Diaz, a worker leader from the Graton Day Labor Center, explained: During the 2018 Santa Rosa fire, “I started . . . cleaning houses that were in the fire zones and whose owners had evacuated. They were filled with smoke and toxic ash.” Her employers failed to give her gloves or masks and consequently she became ill. Diaz and hundreds of others had no legal recourse because they were excluded in 1973 from California’s Occupational Health and Safety Act.  SB1257 was to right a historic wrong.

A Legacy of Exclusion

When the U.S. forged its major labor laws during the New Deal era, it omitted occupations like domestic work and farm work, jobs that at the time were predominantly filled by Black workers. Lawmakers knew that without these exclusions southern legislators, who were committed to maintaining white supremacy, would never allow them to pass. The federal Occupational Health and Safety Act of 1971 followed suit, removing from compliance residential employers of nannies, house cleaners, cooks, or anyone else who performed “ordinary domestic household tasks.”

We’ve been playing catch-up ever since. California’s domestic workers finally gained recognition and rights in 2013, when the state passed a Bill of Rights, which entitled most household workers to minimum wages, rest breaks, and overtime pay. (The major exception was personal attendants under the state’s In Home Supportive Services program.)  By 2020, health and safety stood as the next step toward treating domestic workers like all other workers.

Then the pandemic hit, making SB1257 even more timely. Home care workers for example, cannot socially distance; engaged in intimate labor, they face air-born exposures, like COVID-19. Lee Plaza, from the Los Angeles Pilipino Worker Center who had no choice but to travel by bus after the pandemic hit worried “about getting my client sick, or vice versa.  But if I don’t work, I will not get paid.” Allen Galeon, another Philipino activist, testified, “caregivers like me  . . .are on the frontlines, in close contact with people who are most vulnerable.” While other care workers in hospitals and nursing homes “have the right to protective equipment, training and information,” he had none. There was no sheltering in place for Lee, Allen, and the 300,000 domestic workers who enter some 2 million California households.

Fighting Back by Changing the Law

That’s why Diaz, Plaza, and Galeon joined with others from the California Domestic Workers Coalition (CDWC) to lobby for inclusion in Cal/OSHA.  The California Employment Lawyers Association, Equal Rights Advocates, and Worksafe joined the CDWC among the initial cosponsors to present a powerful alliance. The bill struck out the previous exclusion of domestic workers.

SB1257  also took careful measures to consider both employers and workers. Because Cal/OSHA mostly operates by complaint, the bill contained safeguards for the privacy and rights of employers as well as workers in the compliance process. SB1257 allowed for an advisory committee composed equally of employers and employees to develop regulations appropriate for this sector. This component recognized that there are implementation and enforcement issues relating to home workplaces. No inspector was going to barge into a home unannounced. Rather OSHA would educate and mediate the problem.

Hand in Hand: The Domestic Employers Network, mobilized its employer base as part of the CDWC, acting in solidarity with worker leaders who developed the campaign out of their experiences and knowledge.  Under Director Kimberly Alvarenga, the CDWC created a space to develop talking points. Beginning in the Spring, intensifying in the Summer, and climaxing with passage in the Fall, we learned how to make our voices heard virtually through remote demonstrations, zoom lobbying, and skillful use of social media. We took selfies with signs, posted on Facebook, tweeted, sent letters, and made videos. 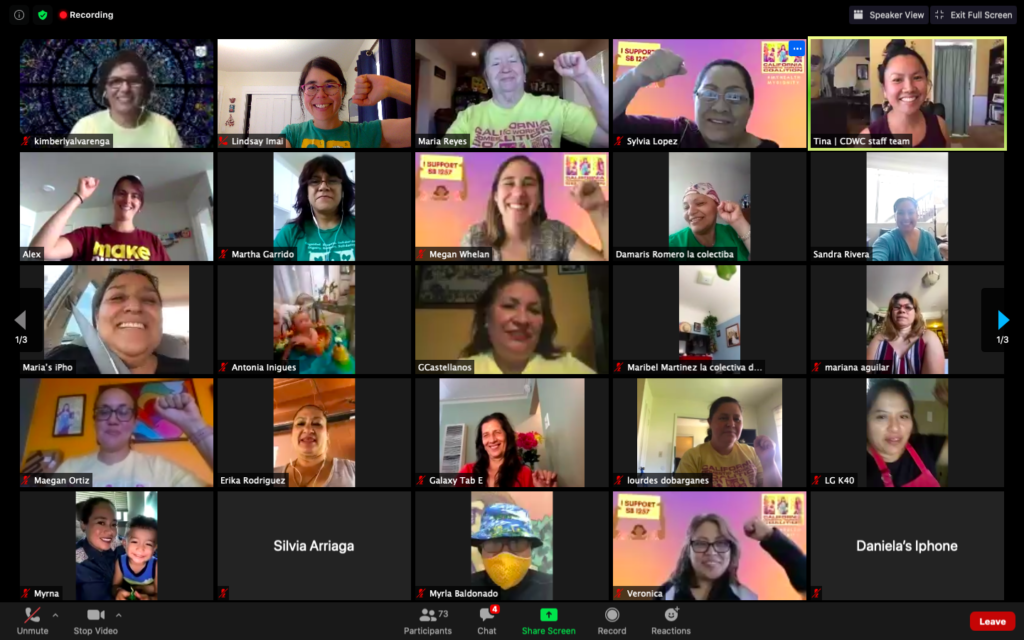 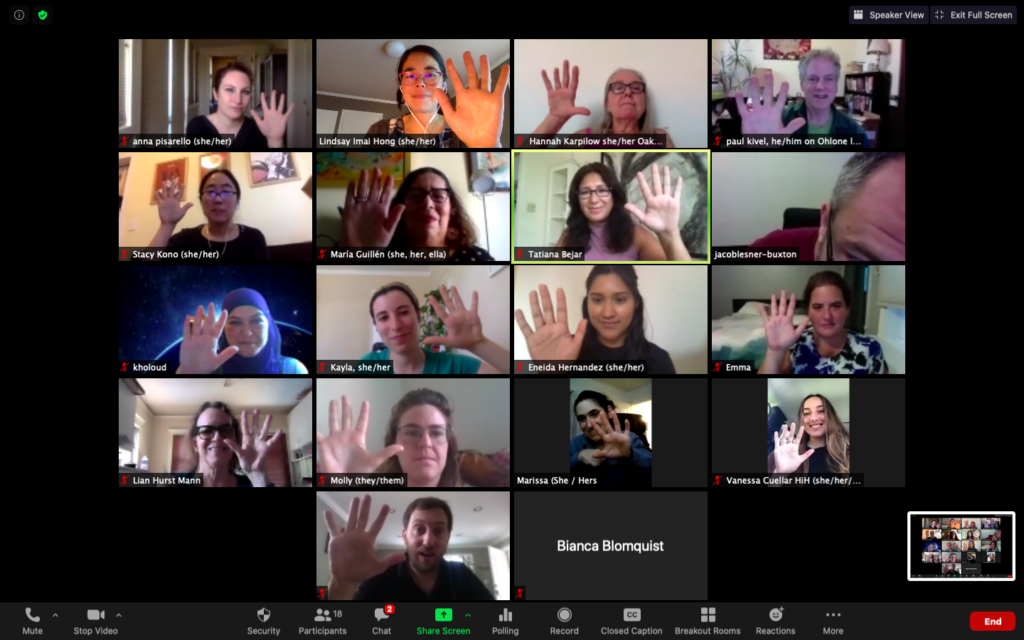 HIH Members hold up 5 Fingers to represent the five days left for the Governor to Sign SB 1257 as part of the Countdown two weeks of action coordinated by the Coalition to pressure Governor Newsome to sign the bill. September 2020.

Hand in Hand employers joined lobbying teams and developed our stories to explain why employers supported protecting the health and safety of domestic workers and welcomed the guidance of Cal/OSHA. We were a diverse group from all over the state, some employed home aides for loved ones, others nannies and cleaners, and others personal attendants for themselves.

Doug Boeschen, a Napa Valley winery owner, was among many when he observed, “By ensuring that our home is a safe workplace for our employees, we are also ensuring that our home is a safe place for our family.” Explained Scotts Valley resident Marie Imai, “Without nannies, home health aides and homecare workers many Californians would not be able to work themselves.  It is just not right that these workers don’t have the same protections as the people they work for.“  Although many employer speakers already were providing non-toxic cleaning supplies and protective gear, they  welcomed additional guidance from OSHA. Such direction was crucial during the pandemic because, as Ian Steinberg from Palo Alto stressed, “health of domestic workers is directly connected to the health of their employers.” Best summing up with a call to “justice” was Elaine Shelly from San Leandro, who employs personal care assistants: “Disabled employers of domestic workers were already acutely aware of how interconnected our lives are with the people who help us. The pandemic heightened this awareness. We cannot be safe in our homes if our employees aren’t safe.” She emphasized, “it is a matter of life and death.”

Employer and worker teams visited 58 Assembly members and 31 Senators.  Most legislators and their aides listened respectfully and signaled their support. But one assistant tried to show how woke he was by bragging that he did his own housework, not realizing that he was implying that anyone could do this labor and thus denying the skill of the workers present. (His boss voted for the bill however). In contrast, an Assemblyman told us that his own mother had been a domestic worker—and he became a cosponsor. A hundred employers and allies took at least one action with Hand in Hand, including making calls, sending texts, and posting on social media. Over eighty of them signed up to send colorful SB1257 postcards to the Governor. During the “Five Days Left” action as part of the countdown for signing the bill, employers and other allies generated 250 posts and emails.

Over the months the coalition convinced the Assembly Labor and Appropriation Committees, then the Assembly, which voted favorably, 58 to 12, on August 26. The Senate followed, passing the bill by 28 to 10 on August 30. Despite this overwhelming show of support, at the very last minute to respond to the year’s legislative session, Governor Gavin Newsom vetoed SB1257 on September 29.

It is worth noting the reasoning in the Governor’s veto. His arguments were more than disappointing; they were misinformed and insulting. He ignored the proposed advisory committee, and reinforced the legacy of sexism and racism in our country’s labor laws, by insisting that homes cannot be treated like other workplaces. He placed the convenience and privacy of employers over the health of workers. And he deemed “individuals to whom this law would apply to lack the expertise to comply with these regulations” as if domestic employers were too stupid to learn and as if other employers naturally understood Cal/OSHA rules. By buying into health and safety as “onerous” and the  procedure of “investigation by letter”– developed to maintain employer privacy–as burdensome, he repeated old canards that opponents to worker rights hold dear: regulation can’t work, it is too hard.  In the end, the Governor’s veto was a reflection of a continued unwillingness to view and treat domestic work as real work.

We Will Return, Stronger

Hand in Hand members know otherwise. When we hire a cleaner, nanny, or home attendant, our home becomes a workplace. That worker deserves the same rights and respect as any other worker. Though temporarily stymied, we will return stronger and more powerful. Laws are, after all, only as good as their enforcement and labor laws require unions, worker centers, ethnic associations, NGOs, and other groups to ensure that rights on paper become rights in practice.  That is why Hand in Hand is proud to work alongside the members of the CA Domestic Workers Coalition who already are strategizing on how to come back and win Cal/OSHA protections.

In the words of Juanita Flores, former domestic worker and current Executive Director of Mujeres Unidas y Activas, “No one stops domestic workers, because we are more powerful than any veto from the governor. The fight continues, nothing shakes us. What has happened has only made us recognize that we are going for more. Ever onward to victory!” 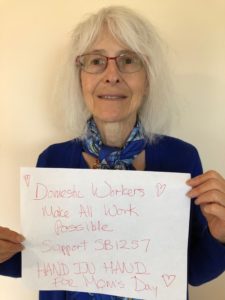 Eileen Boris, a Hand in Hand member from Santa Barbara, is the Hull Professor of Feminist Studies, University of California, Santa Barbara