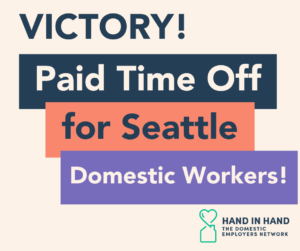 While the Seattle Paid Sick and Safe Time ordinance grants paid time off to all of Seattle’s workers, the vast majority of domestic workers do not receive it. Nannies, house cleaners, gardeners, and other domestic workers often work short-term jobs with multiple hiring entities which can make it difficult to accrue, track, and use paid time off, under the current system. Workers have identified the need for a “portable” benefit system, that is attached to the worker, which multiple hiring entities can pay into.

Domestic workers have shared powerful testimony about how critical it is for them to be able to take a paid day off to care for themselves and their families. Many workers are forced to come to work sick, even during the COVID-19 pandemic, because they cannot afford to lose one day, or even one hour, of paid work.

Laura, who works as a nanny shared:

“When we don’t have access to paid time off, it means that a lot of the time we have to go to work sick or make the difficult decision of adjusting our budget, which is generally already at its limit. As many of us are living day-to-day. (Taking a sick day) adds extra stress of thinking of how we will pay for basic necessities like rent, phone bill, and gas.”

Seattle employers have shown up to demand that workers get this right. Employers want to do right by the workers in their homes and recognize that workers being able to stay home when they, or their family members, are sick takes care of all of us.

We know that (paid time off for Domestic Workers) is important for Seattle, because Seattle espouses values of social justice and antiracism, and this is part of walking that walk. And it is really necessary for all of us as employers as well, to have the dignity in ourselves and in our relationships to be able to show up equitably in that exchange, be in right relationship with the workers in our homes, and be part of moving the sector forward in expectations and standards for workers.

Hand In Hand is going to continue to work with worker organizations and the city of Seattle to develop the portable benefit system. We are thrilled that the Seattle City Council has moved us closer to the day when all domestic workers are able to get the time off that they so desperately need and deeply deserve.