Seven children seeking asylum in this country have died in U.S. custody this year. And we’ve all seen the news these past two weeks—‘appalling’ conditions in the detention centers where immigrant children are being held, with some children not given an opportunity to take a shower, sleep, or have blankets. We are witnessing crimes against humanity—in our name and with our tax dollars. As parents, grandparents, aunties, and caregivers, we are devastated by what is happening, and cannot be silent.

We have revised our playdate protest toolkit and invite you to organize a protest to #CloseTheCamps. It can be big or small, and we are on-call to help you plan it. There will be a national day of action on July 2nd so organizing your protest on July 2nd or around then is ideal. Fill in this form if you’d like to join our campaign or if you want support to organize your own action.

Sunday, June 30, 5:30 Pacific/8:30 Eastern, we’ll be holding a call to support people interested in planning an action in your city! RSVP here.

Join us for this August 14th webinar for an interactive session with the National Domestic Workers Alliance and Smith College to learn about the history of domestic work and domestic worker organizing in the United States. Cleaning, cooking, and care have been a part of women’s lives throughout history, but today they are also gainful employment for millions. Together, we will reflect on the historical legacy of sexism and racism that still impacts women today, and will also gain inspiration from previous generations of organizing. RSVP here.

If you employ a house cleaner

Does a house cleaner regularly come to clean in your home? Then you probably want to know how to you can be sure you’re doing the right thing as an employer! Join us for this July 17 webinar to learn about fair pay, whether or not you need a contract, and how you can help ensure both you and the person you employee will be happy. We’ll also introduce Alia, an innovative online benefits platform designed by the National Domestic Workers Alliance—it’s one of the most exciting tools we have to put our values into practice at home. RSVP here.

If you Employ a Nanny

Join a “deep dive” online workshop on July 11th from 4-5 pm PST / 1-2pm EST with Inceptive Education. Learn about everything you need to think about before you begin your nanny search. This session covers legal details of being an employer, including your rights and responsibilities regarding overtime pay, paid time off, sick leave, and payroll, as well as other common questions about establishing wages. We offer tips for establishing a work agreement, setting up nanny shares, how to ensure a fair and safe workplace, and best practice for creating a positive, long-term relationship with a nanny. Register here.

Join our Workshop Facilitation Team. Have you participated in one of our My Home is Someone’s Workplace workshops at Bananas, Natural Resources or online in the last year? Would you like to help us share best practices for employing a nanny with others? Join our lively group of workshop facilitators, connect with other parents and help grow the movement for domestic worker rights. Contact Suzanne at [email protected] for more information.

California Domestic Worker Coalition Leaders Convening was a success. Last week Hand in Hand member leaders joined with other San Francisco leaders of the California Domestic Worker Coalition for a celebration, reflection and planning event. We gathered to build a collective vision and understanding of the domestic work movement in San Francisco, create space for leaders to vision and provide direction of the movement in the city, and celebrate and recognize the organizations in the collaborative. Sascha Bittner MC-ed on behalf of HiH along with Luz Sampedro from Mujeres Unidas y Activas. HIH members Maria Guillen and Michael Lyon presented a poem and award to La Colectiva de Mujeres for their leadership and organizing over the past year. 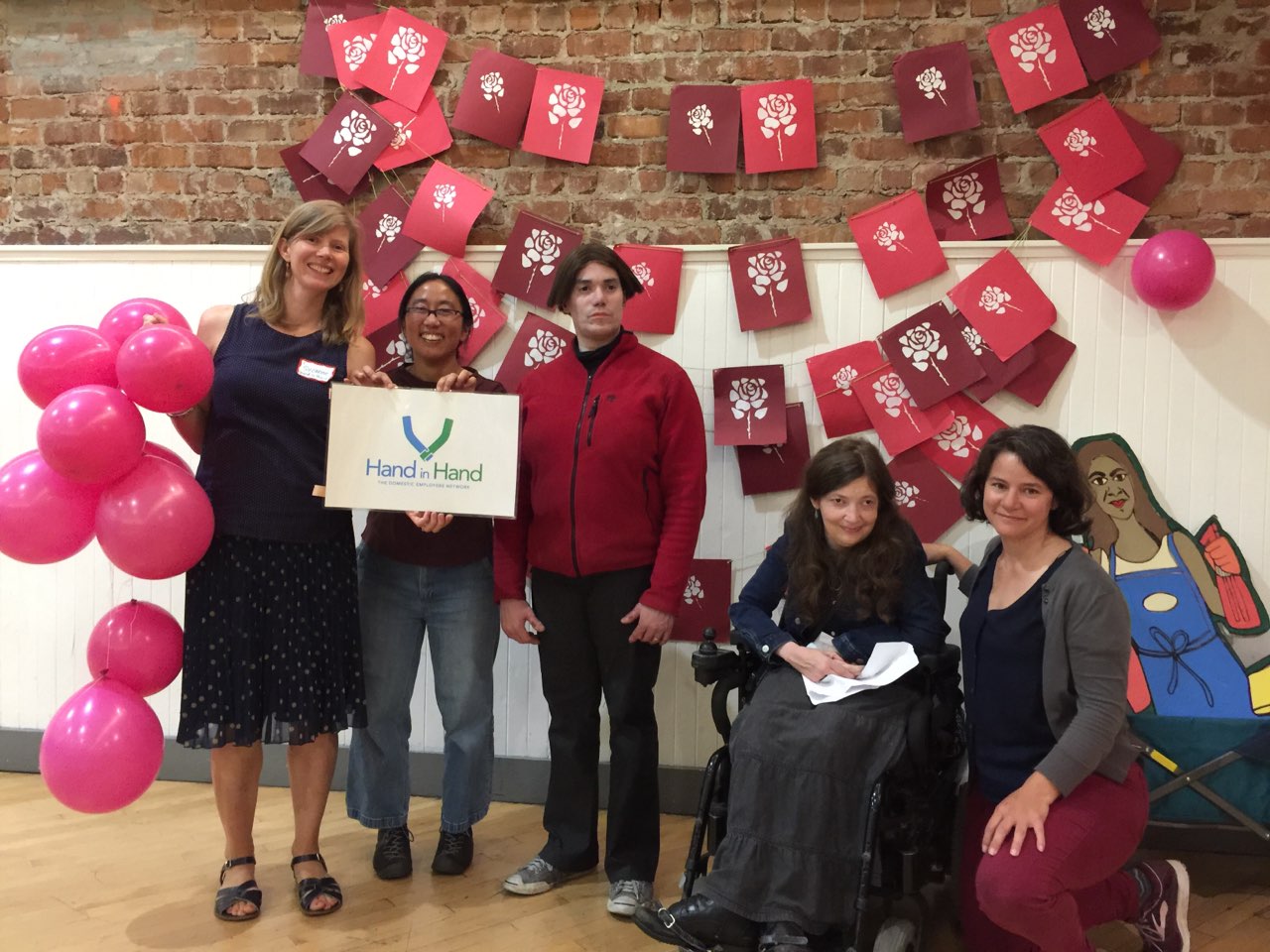 Our newest chapter in the Hudson Valley, New York has been mobilizing as part of the fight to save the Consumer Directed Personal Assistance program (CDPA). CDPA allows 100,000 seniors and people with disabilities in New York State to hire loved ones, people they know, or people they personally hire, to provide home care. The Cuomo administration is threatening to cut 150 million from the program, which will force the fiscal intermediaries that enable this program to operate, to shut down their operations. This could force thousands of people who want to remain in their homes into nursing homes, and the cuts could come into effect as early as July 1 this year!

Please call Governor Cuomo to demand a delay on the implementation of these cuts so a full study can be done on the impact this will have on people who need home care in our state. Call 518-474-8390 and press 2 to speak with a real person. 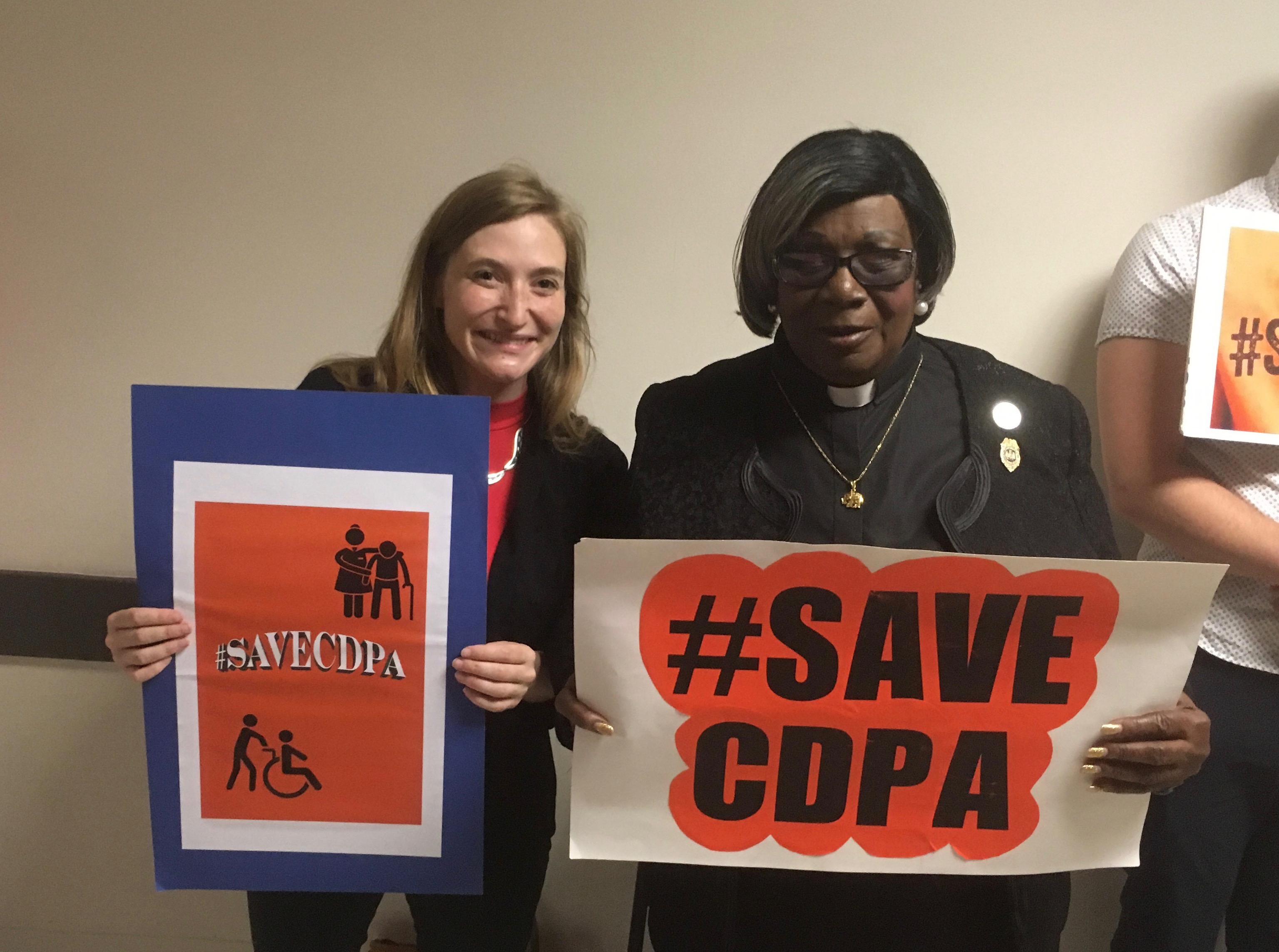 Call your Council Members in the next few days! Help the National Domestic Workers Alliance (NDWA) and Hand in Hand get Intro 339 passed in the New York City Council. Intro 339 would amend the NYC Human Rights Law to include domestic workers as a protected class against discrimination and harassment in the workplace. Email Tatiana at [email protected] to get the script and phone numbers. We are targeting: Ydanis Rodriguez, Stephen Levine, Costa Constantinides, Ben Kallos, and Speaker Corey Johnson. Go to this link to make sure your Council Member has signed on to the bill!

On July 12th at 7pm we will join Lights for Liberty at Foley Square to demand that ICE end its inhumane policies in solidarity with all the immigrants detained in these concentration camps. Email Tatiana at [email protected] to RSVP.

To get involved with #ClosetheCamps organizing in NYC, email Tatiana at [email protected].

Our NYC members continue to mobilize to end concentration camps on the border. On June 24th we joined the No Kids in Cages vigil in front of Senator Charles Schumer and Senator Kirsten Gillibrand’s offices to demand a stronger position from our elected officials against the government’s cruel immigration policies.

NYC members at the No Kids in Cages vigil in front of Senator Charles Schumer and Senator Kirsten Gillibrand’s offices.

Anti- Sexual Harassment bills and S06577/A08421 got passed in NY State! Our members, in support of domestic workers and other workers who are vulnerable to sexual harassment in the workplace, helped with the passage of two ground-breaking bills to remove the unfair barriers placed in front of survivors’ ability to access justice: The Time’s Up NY Safety Agenda, which gives survivors extended time to file their claims.

NY Senate, Bill S5433A passed, an important step to prohibit state chartered banking institutions from investing in and providing financing for private prisons. There is no small victory, and this is a great step in the right direction especially after a national coalition of organizations, including Make the Road, NDWA and HIH, organized for over a year to get Wells Fargo and JP Morgan Chase to defund GEO group and Core Civic—two of the largest companies who owned concentration camps that keep immigrant families separated.

Happy 20th Anniversary, Olmstead!
It’s the 20th anniversary of a major milestone in the movement for disability rights. And as our society ages, “the Olmstead decision” will only become more important.

Happy International Domestic Workers Day!
With many nations turning inward in recent years, we have all the more reason to celebrate the occasions in which people from around the world have come together to create a more just world across borders and cultures.

Roma, 6 months later
Alfonso Cuarón and Netflix’s Roma created something of an instant revolution. Domestic workers suddenly became the center of their own stories. And instead of being one of things that just isn’t spoken about much, it became the spark of a roaring conversation.

WE BELIEVE THAT NOBODY ON THIS EARTH DOES IT ALONE.

Thank you to everyone who engages with this work, helping find the ideas and actions that will change our society. Please consider joining our community by becoming a sustaining member of Hand in Hand, for as little as $3 a month, so that we can keep doing the work of creating a more interdependent world.

Notes from the DEN is produced by Hand in Hand, a nonprofit mobilizing all people who care for family members or hire domestic workers to support them. We believe getting good care means offering good jobs.